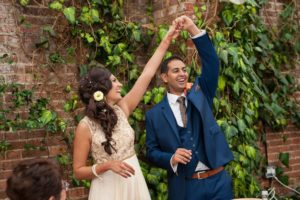 Wedding Planning With Your Photography In Mind 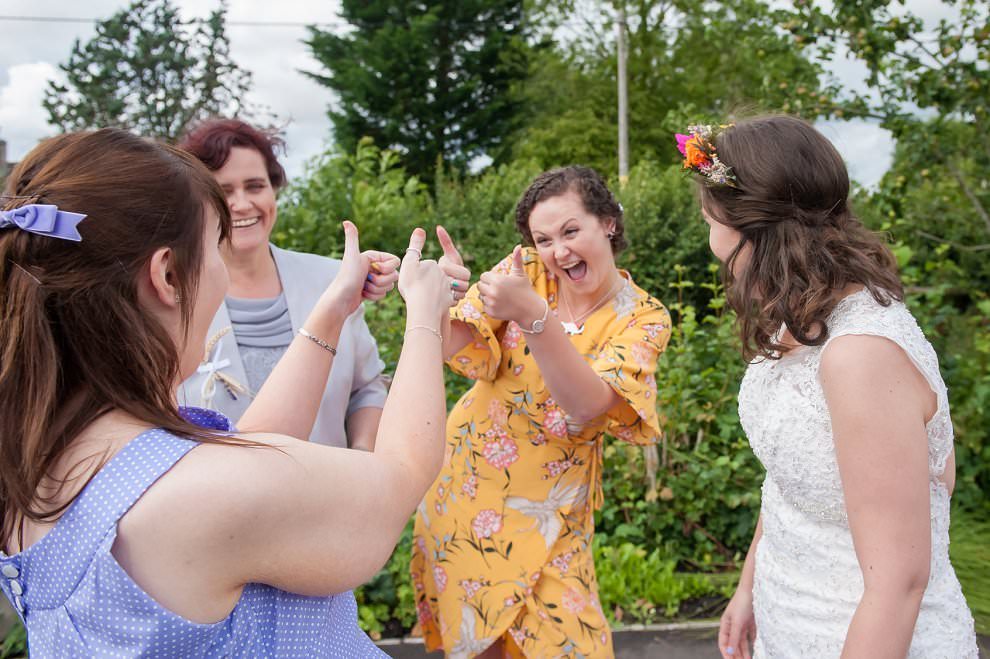 If you’re anything like I was as an engaged person, you’ve probably looked online and found hundreds of thousands of articles about wedding planning: A monthly countdown of important “To Do”s, checklists to make, advice on choosing your bridal party and how to deal with difficult family members, lists and lists of venues and other suppliers, and all sorts of other overwhelming stuff! And this is before you even hit Pinterest and start looking at all those delicious photos…

But while the wedding blogs and magazines have got you covered on the overall, big picture planning of your wedding day, I noticed that there wasn’t much out there about wedding planning specifically with your photography in mind – and of course this is a big deal for me! The most important thing to remember is that your photographer can only work with what he or she is given. I wish I could step out of Harry Potter and swoosh my wand around and Wingardium all those pesky Levi-OH-sas, but alas, nope. But here are some of my top tips for wedding planning to ensure you get the kind of photographs you’re envisioning! 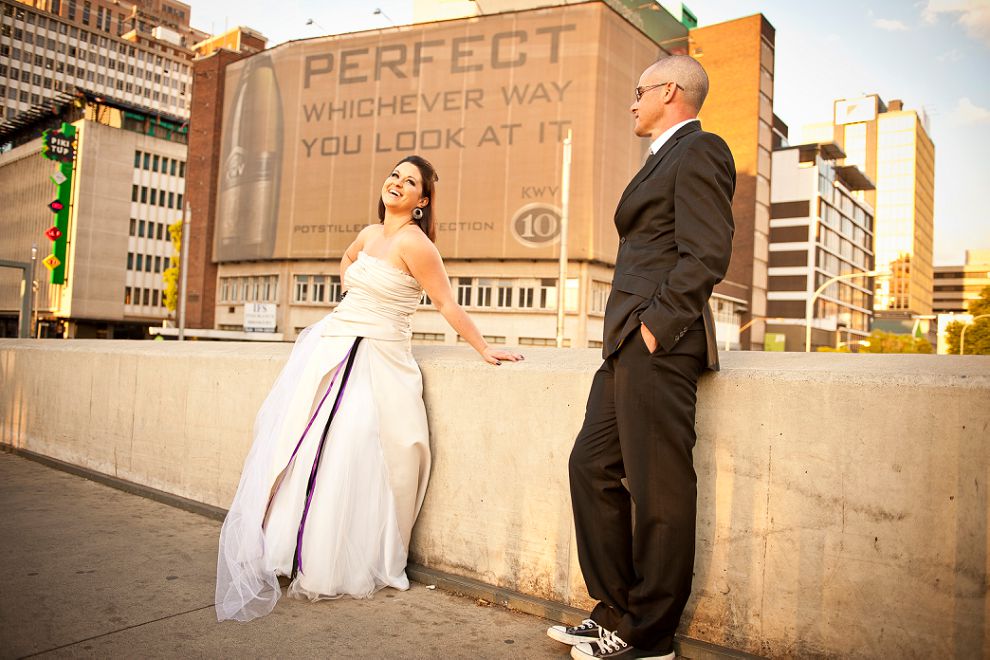 Time of Ceremony Depending on the Time of Year

(It’s All About the Light)

If you’re getting married in the winter months in the UK, the sun is going to set EARLY. And for photography, the last 45 – 60 minutes before “actual” sunset aren’t great, either. So you’ll need to allow enough time after the ceremony to get all your family groups and couple photos done. You can pop over and read an article I’ve written about planning your wedding day timeline, which will help you work out how long things actually take! But just be aware that if you want photos outside in natural light (which is always the best and most flattering light), you can’t set your ceremony start time to 3pm, because it’s just not going to happen!

Of course, if it’s summer, you can start much later! But then the opposite also applies – if your ceremony is early, for example around 1-2pm, the light is incredibly harsh, and comes down from directly overhead, resulting in a lot of dark shadows under eyes and noses. Quite often I’ll do the family photos in a shady area to avoid this, and then keep your couple photos till later in the evening when the light is soft, and you might get that lovely golden glow (possibly my favourite thing in the world!) 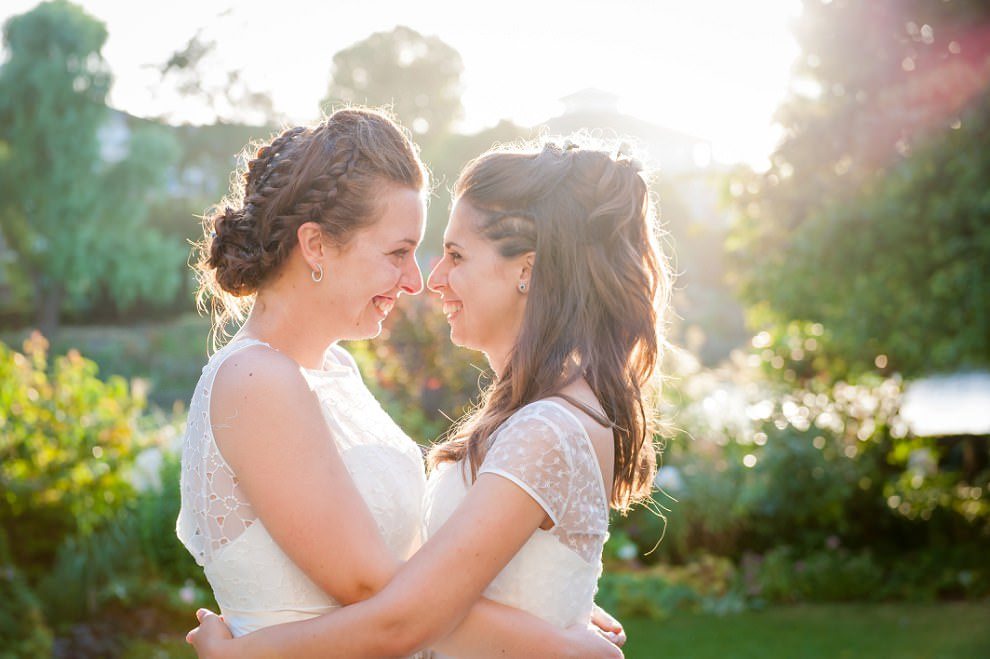 We took Ale and Eva outside for some extra portraits especially when we saw this beautiful golden backlighting! 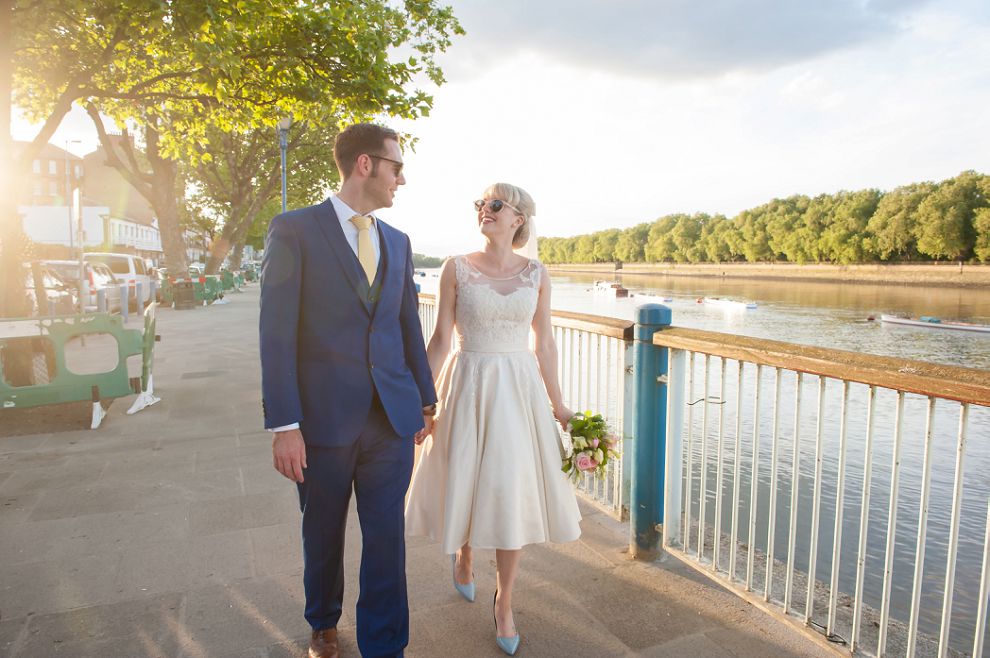 Hannah and Sam did their couple portraits after dinner during their summer wedding, to make the most of this beautiful light. This was taken just after 8pm. 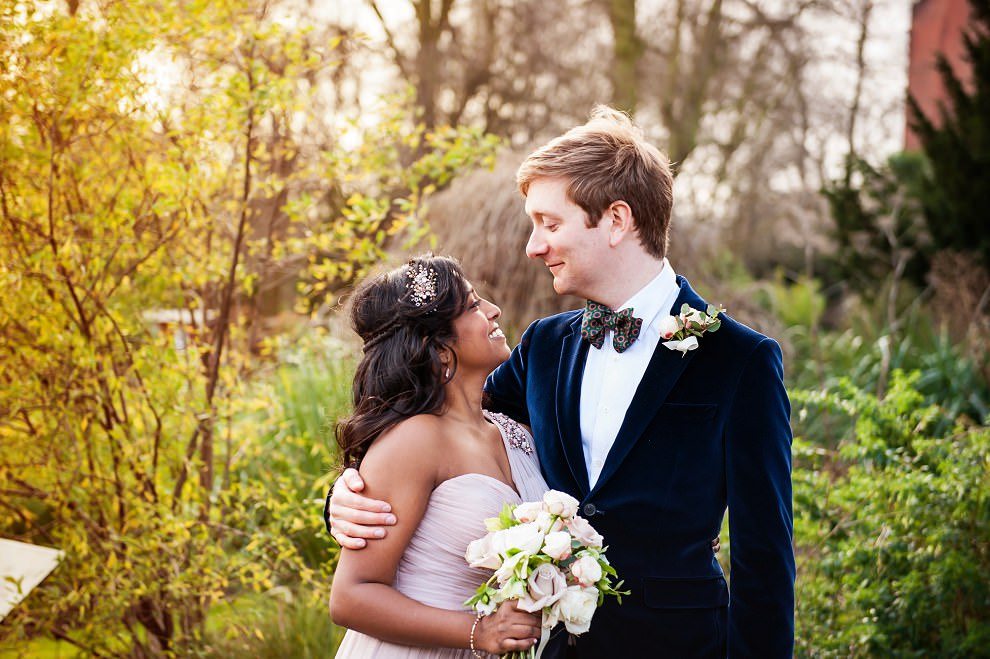 Shwetha and Phillip managed to get some lovely light at their winter wedding in February, too!  But this was taken at around 1pm.

Choosing Your Getting Ready location

(It’s Still All About the Light)

Where brides and grooms get ready before a wedding is often a last-minute decision. Quite often they haven’t even thought about it until a week or two before the wedding day! And then it’s a last-minute hotel or a friend’s house – both of which are more than fine if they’re what you want in your wedding photos! But hotel rooms can be cramped and tiny, and let’s face it, there’s hardly any space to manoeuvre around the bed! They’re often very dark, and have those pesky overhead spotlights which cause the same panda eyes as overhead sun. So see if you can have a look at the specific hotel room you’re booking beforehand – something with big windows (preferably high up so you can keep the curtains open to let the light in) and a bit of space to get around the bed is perfect! It will also be much better for your make-up artist to see how you’ll look in natural light. 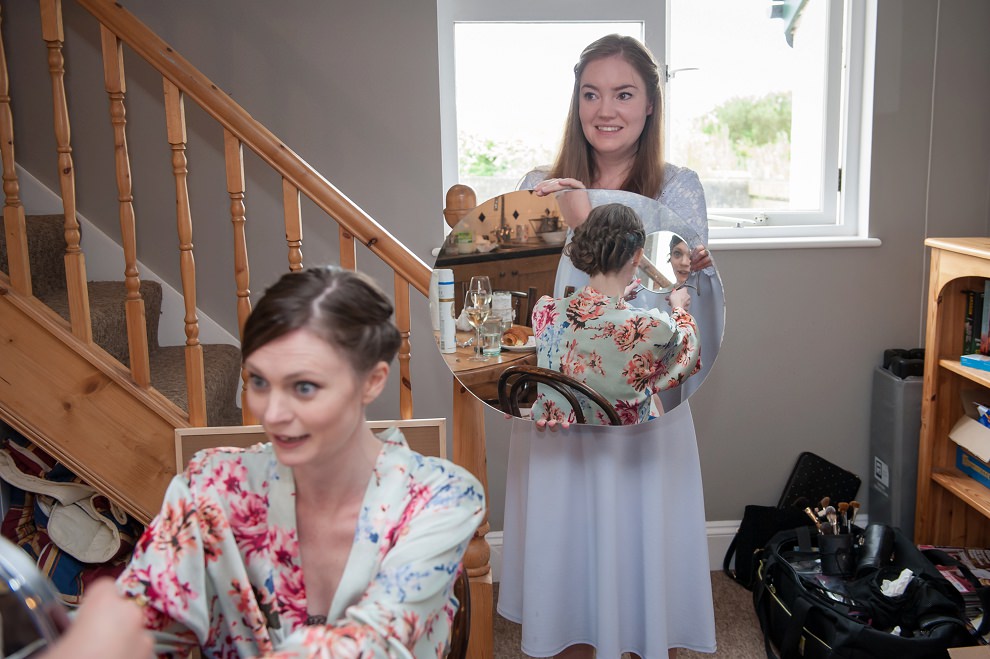 When it comes to getting ready at someone’s house, it’s quite often the parents’ home, or your own home for one, if not both, of you. Now this can be super lovely, because it means that there’ll be rooms and pictures and furniture which all have special meaning to you in your photos. But it can also look very cluttered, because it’s lived-in. So have a think about the specific rooms where you want to put your dress on, or get your hair done, and tidy them out beforehand – for example, you don’t want old bathrobes hanging on the door in the background while you’re putting on your wedding gown, or piles of shoeboxes – or anything that creeps into the frame and detracts from you! 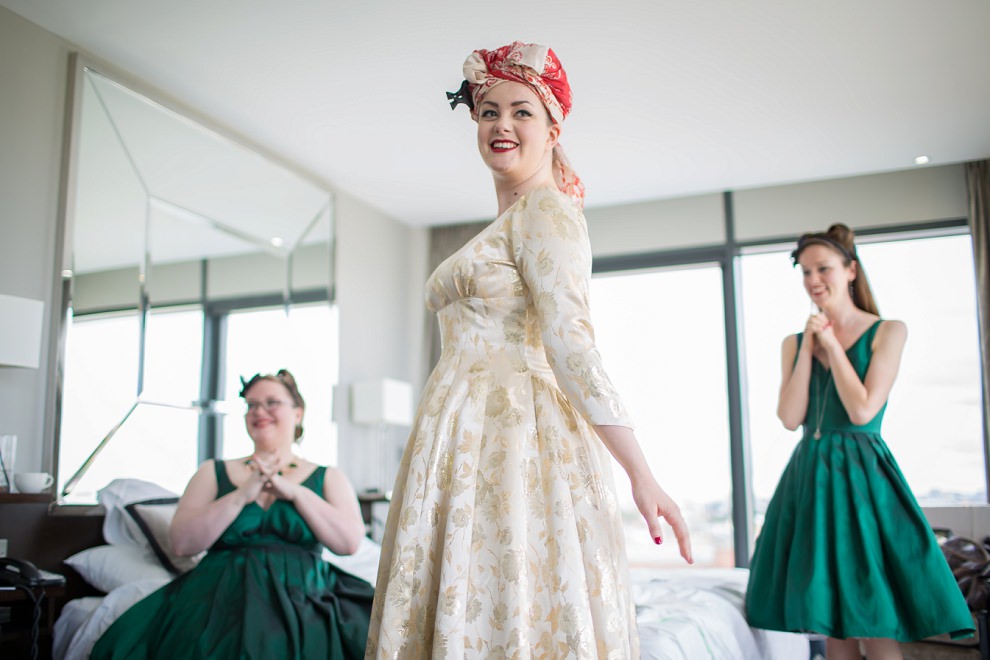 Steph’s hotel room had amazing big windows and lots of space for her parents and bridesmaids (and me!) to move around. 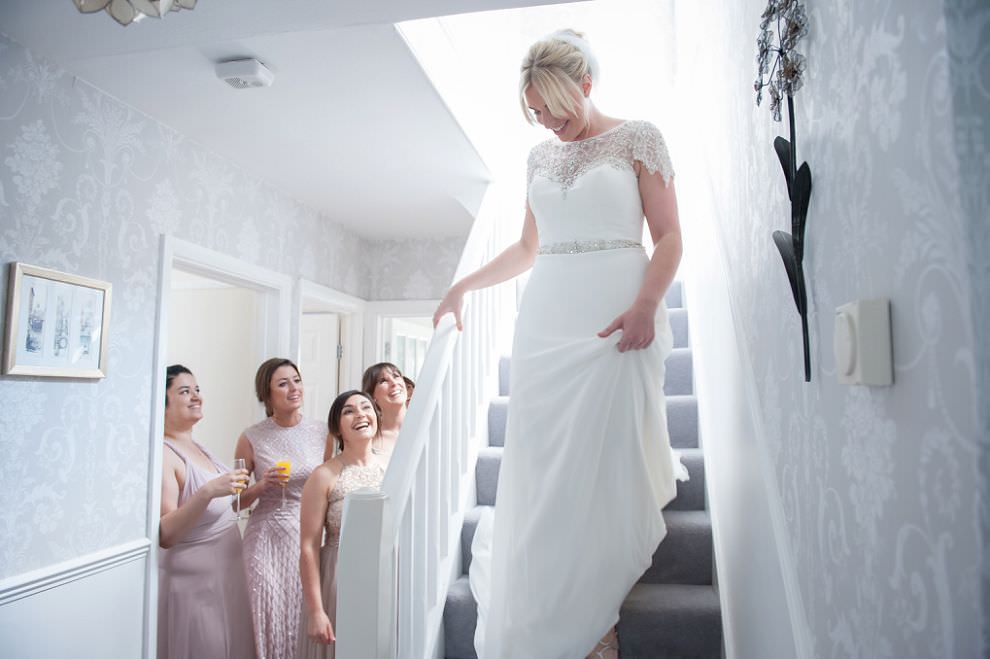 Laura got ready at her parents’ house, which was wonderful for nostalgia and for its light and space! 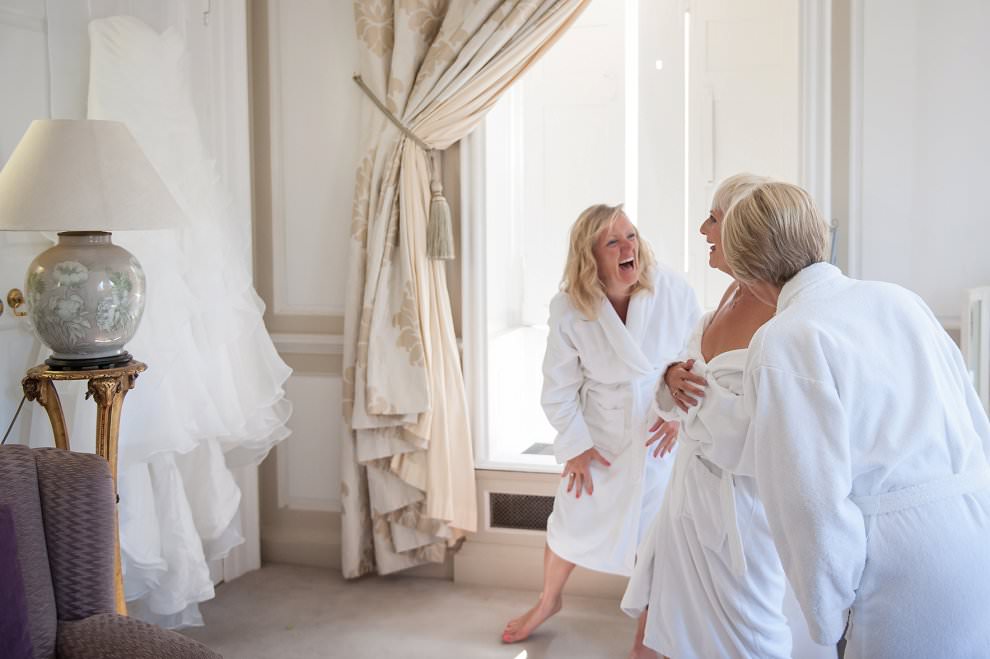 Jane’s getting ready room was one of the hotel rooms at the manor house where she and Matt were married, and it was perfectly laid out for its purpose, with lots of windows and no bed (it being a dedicated getting ready room).

(I Can’t Believe It’s Still All About the Light)

If you’re going to be outside, have a think about what sort of coverage you have overhead. If you’re going to be standing under a canopy or similar, that’s great, as you’ll have smooth light on your faces – whereas if you were under a tree, the light could be dappled, and one of you could be in bright light and the other not, making things very difficult to expose for! Obviously it’s beautiful to get married under a tree, but just be aware of the light and where it’s falling on you. 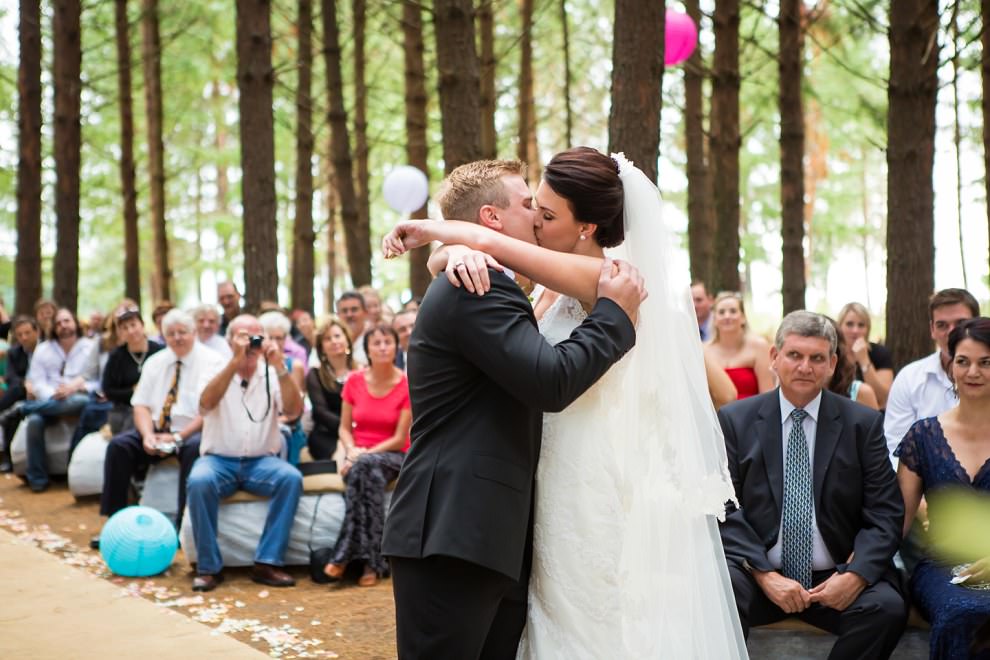 Anja and Mike’s woodland ceremony was beautifully shaded so that they were evenly lit. 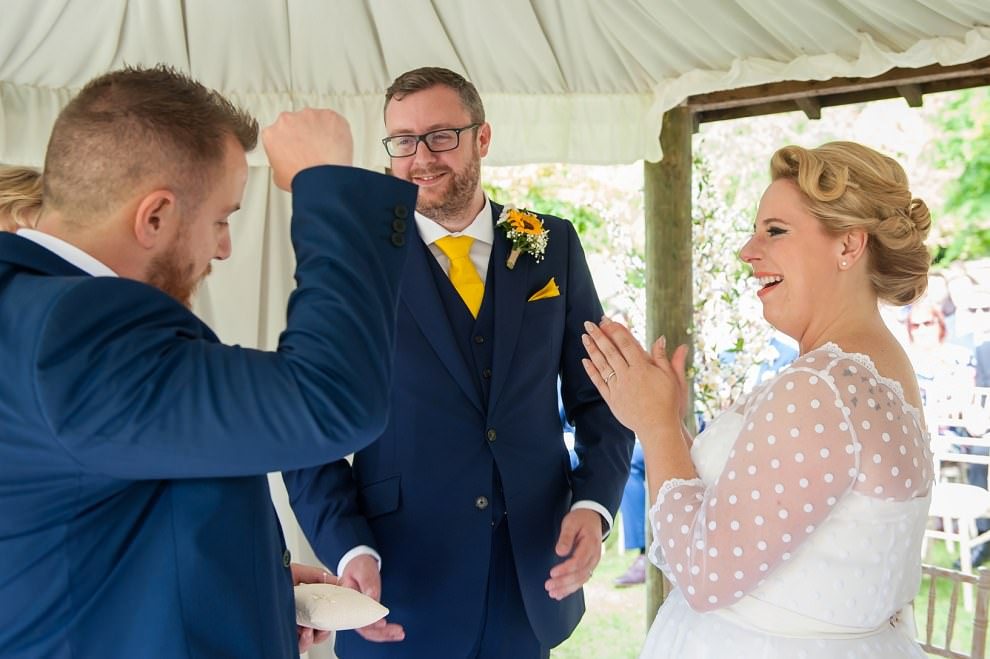 Angie and Martin’s gazebo at Chippenham Park was open at both sides, so that whichever way they were facing, they had the light on them at all times!

Again, I’m a fan of natural light in these, but of course that’s much harder to control than in a getting ready location of your choice, where I can ask you to put your dress on facing the window! So if need be, I’ll bust out the flash (don’t worry, it will never ever be pointed directly at you, only upwards). But if you do have different options when deciding on the layout of your ceremony room, I would advise always choosing to stand facing a window, so that the light falls on your faces – and on your guests in the background. The officiant will have their back to the window, and I’ll stand with my back to the window, too, to capture your faces! Windows down the sides are also great, so don’t let this worry you too much – just try not to stand in darkness, basically! 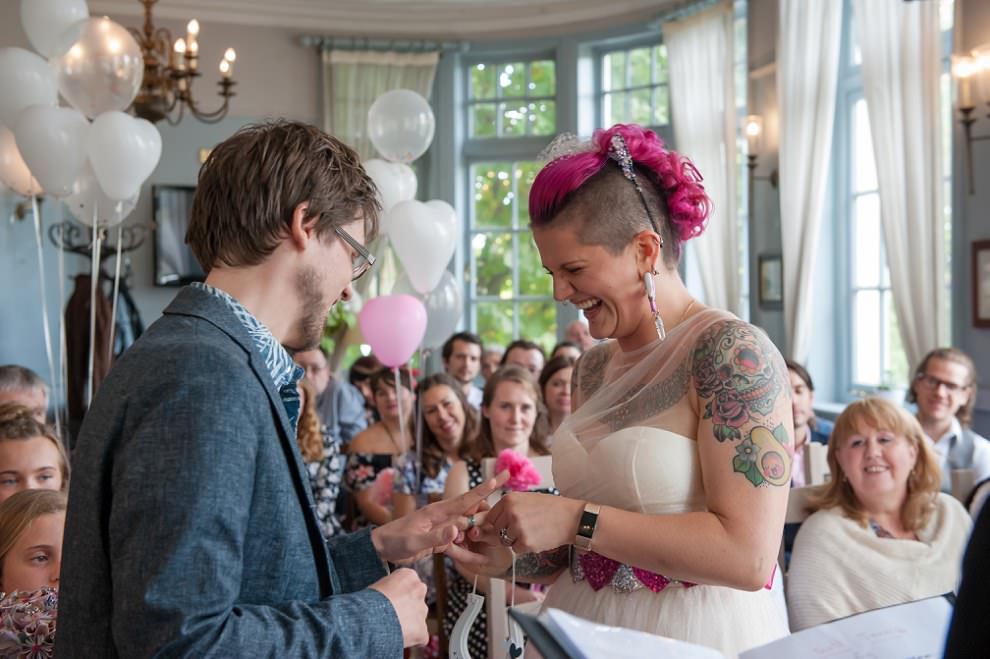 Jennie and Scott’s venue had windows at the front and all down one side (you can see the side windows in the photo, and the front windows are behind me), ensuring that they had even light on them both from the front and the back. 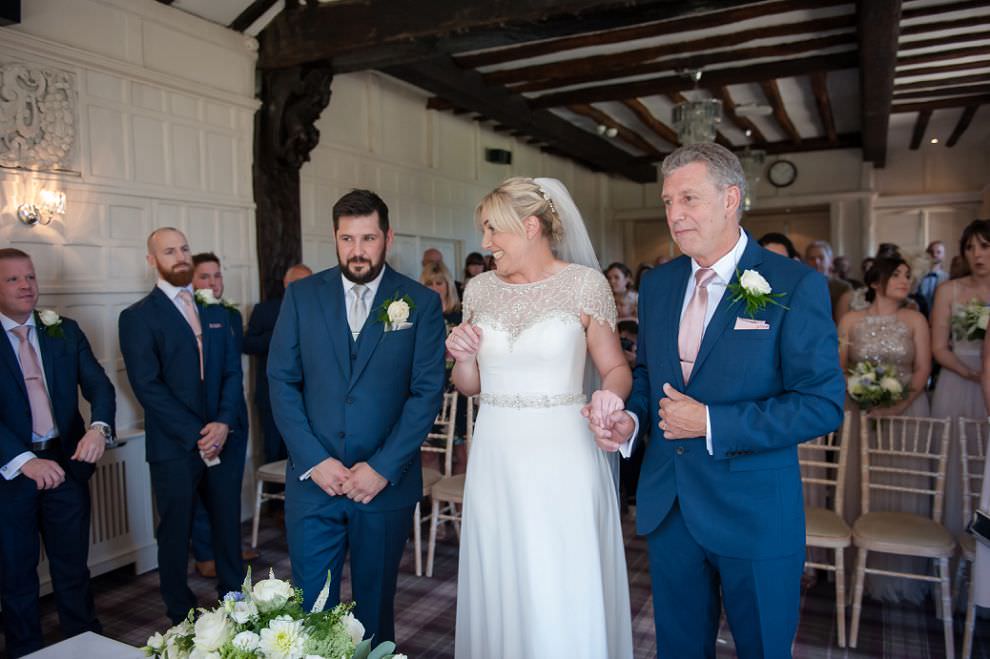 Laura and Jack’s venue had a massive window right behind me, which was perfect for lighting them! If they’d chosen to stand at the opposite end of the room, it would have been much darker and much less pretty!

A few things that aren’t about the light (I know! There are some! :-))

*Try not to have tall table arrangements on the main table. I love to get photos of the two of you laughing and interacting during the speeches, and I can’t do it if there’s a giant candelabra or table name on a stick between you! The same goes for shots of your parents and other people at the main table. 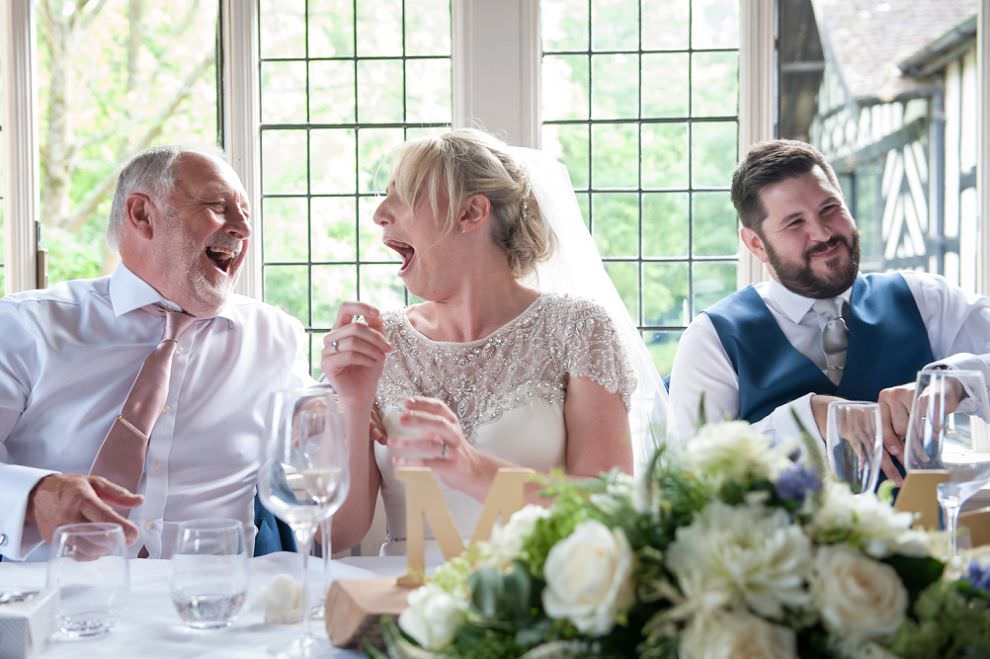 Laura and Jack again, and Laura’s Dad – I couldn’t have got this shot if the table arrangement had been a high one, as it would have blocked at least one of them.

* Give your guests some fun stuff to do. Garden games (giant jenga, spacehoppers etc) always go down a treat, but even if that isn’t your bag, there are plenty of other ways you can get your guests enjoying themselves. Most of my couples ask for photos of their guests having fun, and while I am always on the lookout for laughs and smiles while people are chatting, you’ll get so much more if they’re doing something, be it games or pimping their prosecco or just lounging on deckchairs in the sun! 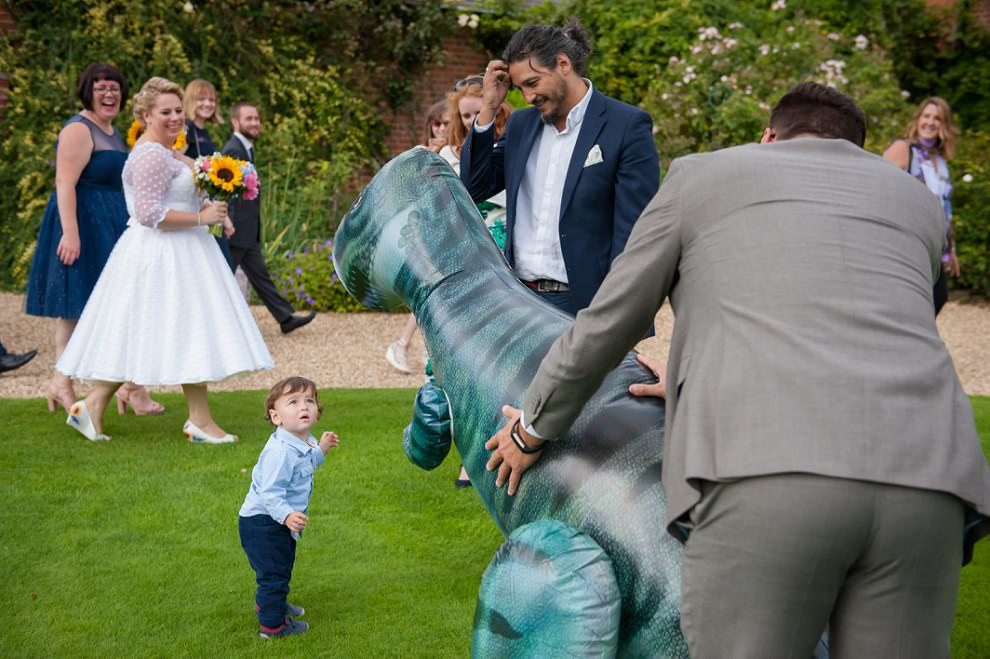 Angie and Martin’s guests had a blast playing with the blow-up T-Rex at their wedding! 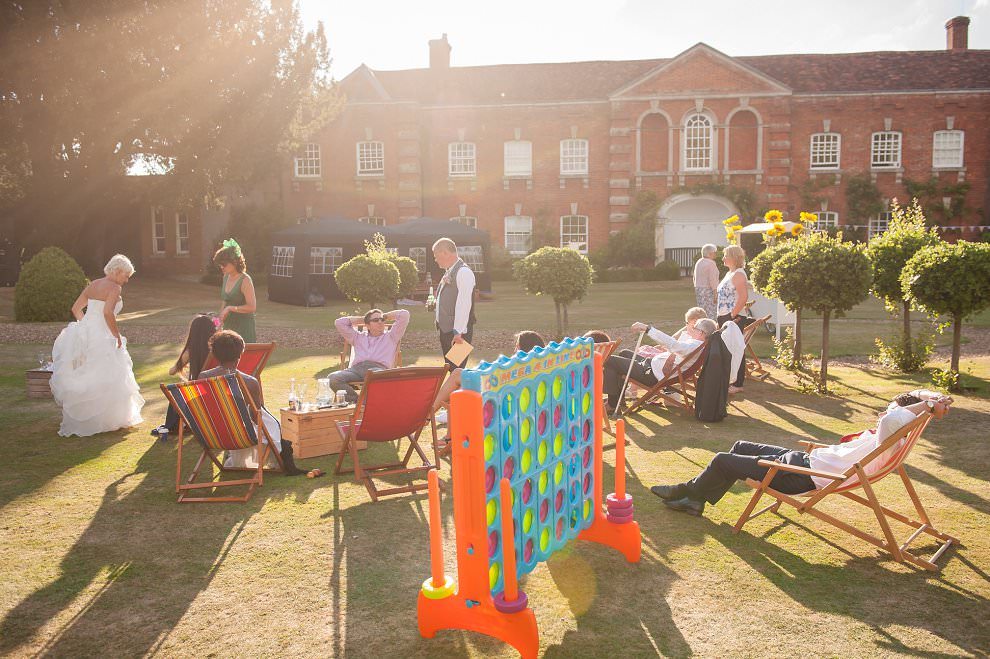 Jane and Matt had garden games, food stalls and deckchairs, resulting in a fun but relaxed afternoon.

* Think about where I’m going to stand. The last thing I want to do on a wedding day is be in anybody’s way, so for formal moments like the ceremony, make sure there’s space for me to stand up front and facing you – in other words, don’t let the officiant be right back against the wall, and you two feet in front of them, because then I won’t be able to get far back enough to get you both in the picture! Make sure there’s a nice open area between the front row of guests and the front of the room.

*If you’re having a church wedding, please please please check with your vicar/priest about where I’m allowed to stand. I’ve been told so many times that there are no restrictions on photography, only to arrive and be told that I have to stand right at the back and never move. I’m happy to fall in with what they ask, but I don’t want you to be disappointed that there are no shots of your faces during the ceremony, or even walking down the aisle!

*Think about what’s behind you during the speeches. So often it’s black speakers on stands and the DJ booth, which really doesn’t make for pretty photos! Some of my couples have created flower walls or colourful hanging circles/origami just so they have a pretty background for the photos of them at the top table! 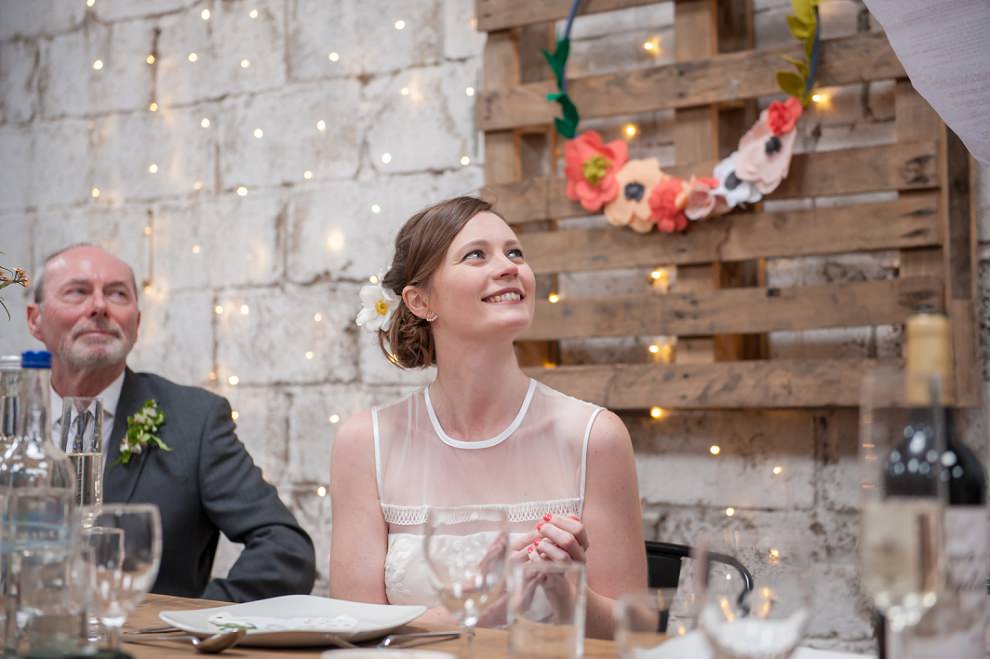 Sophie and Elliott had strings of fairylights hanging up against the cool white brick walls of their venue, as well as wooden pallets with origami flowers! 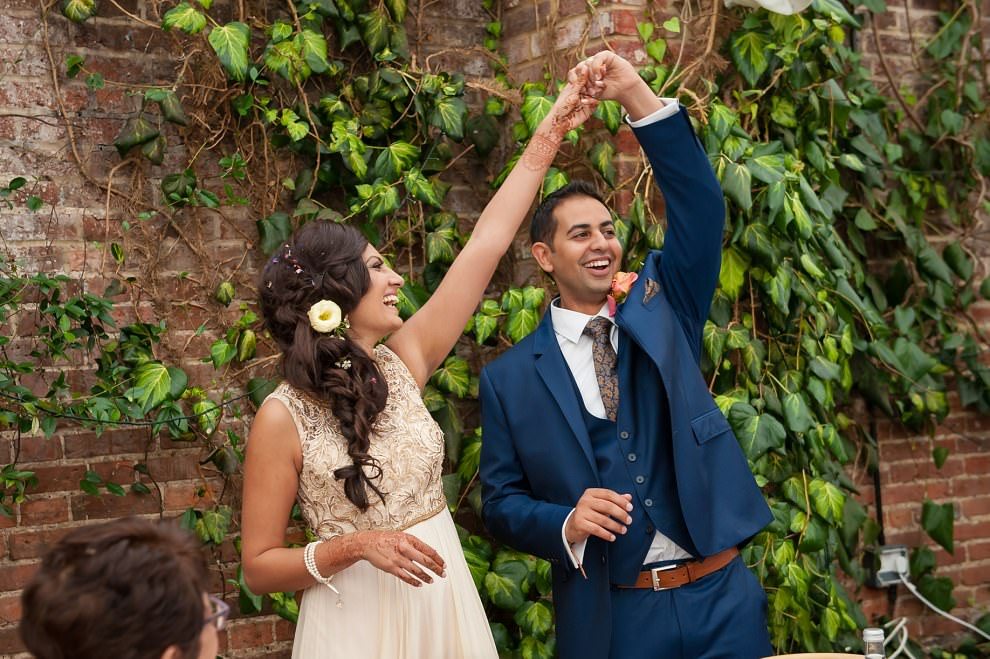 Zohra and Sumeet’s venue, Northbrook Park, already has beautiful vines growing on the brick walls in their reception room – no need to decorate anything!

I hope these will get you started right from the beginning when you choose your venue! Remember: None of these things are dealbreakers. I don’t want you to give up the venue of your dreams because you’re worried that I won’t like the light! The info I’ve given you is more to clue you in on what I, as a photographer, look for, so that you can make informed decisions when it comes to layout and planning. I always encourage my couples to ask me for advice about this sort of thing, so don’t hesitate to drop me an email if you’re unsure! 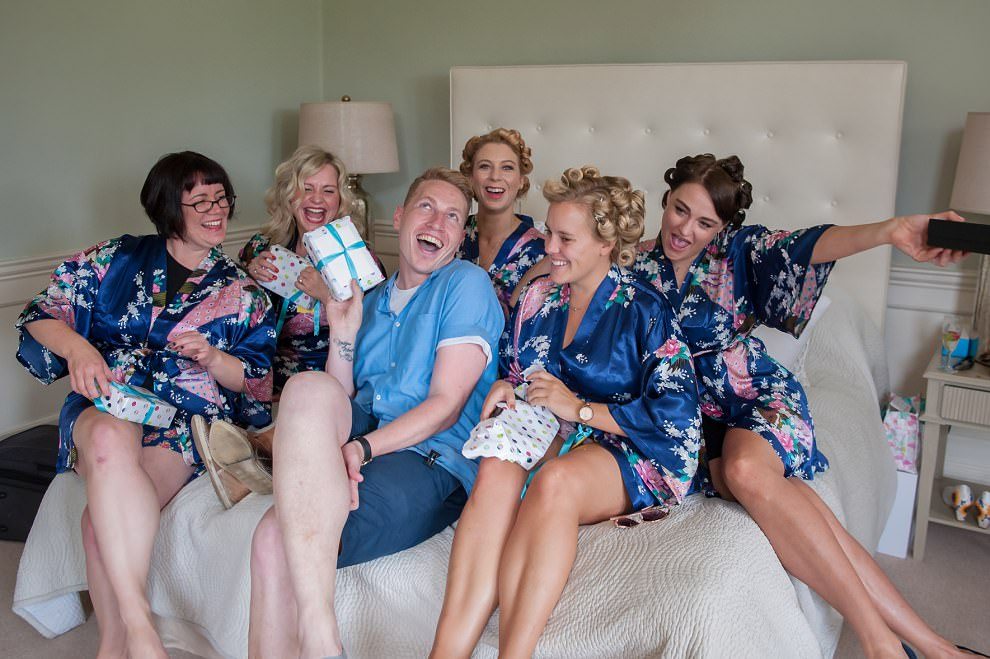 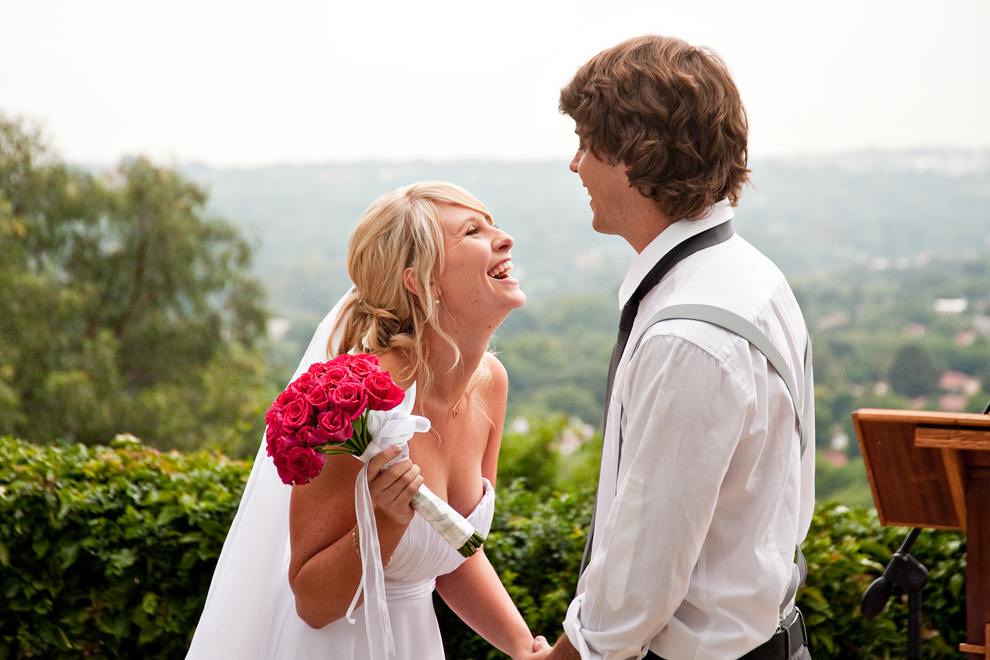 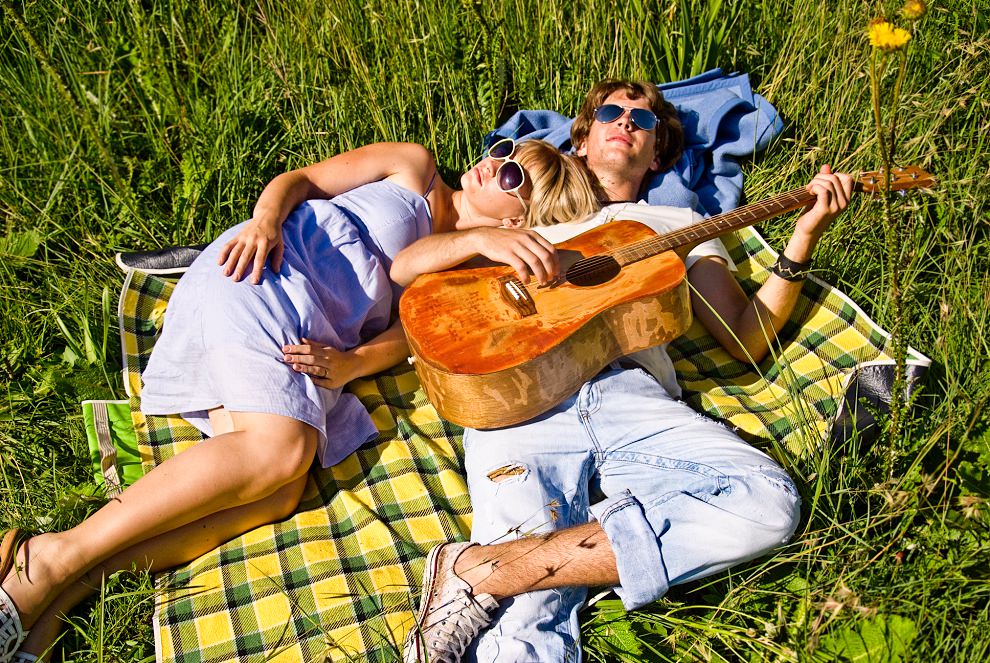 Wedding Planning Tips – Engagement photos: Do you need them? 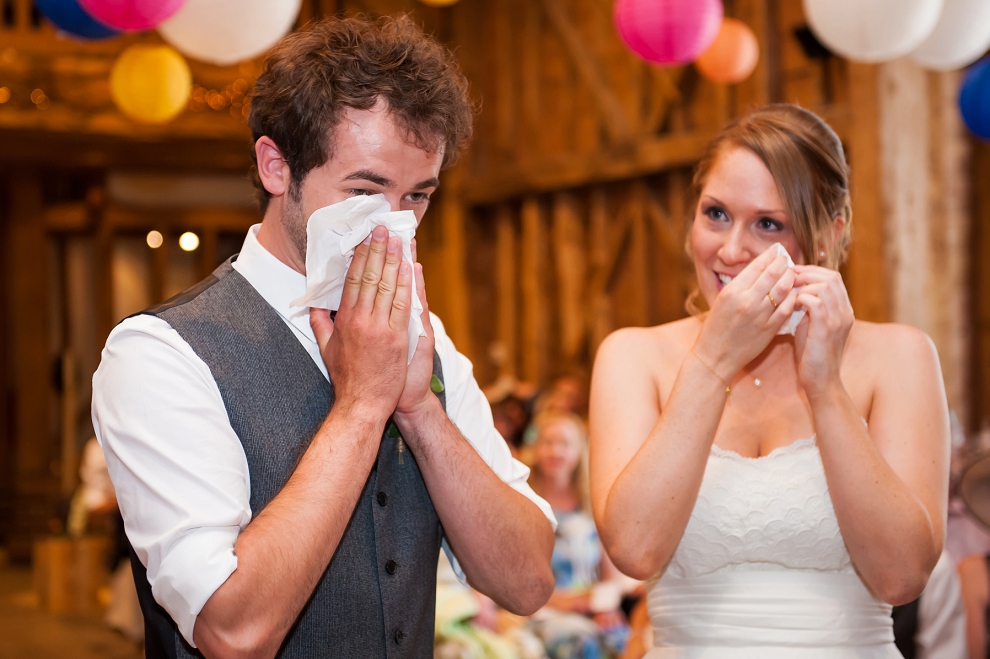